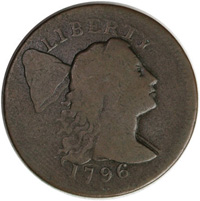 Some issues of this type were struck on tokens of British origin, and various edge varieties are also known. Most planchets were imported from England by ship and many show corrosion, due to chemical reaction after exposure to sea water. Production quality varies, with many showing weakly struck devices, especially for the examples struck on thin planchets.